Soundscapes and a new type of community development

“Soundscape” might be a word unfamiliar to you. It is a word coined by combining “sound” and “(land)scape” and was popularized by R. Murray Shafer at the end of the 1960s. Shafer is a Canadian composer of contemporary music. He is also a music educator and environmentalist.

Soundscape is often translated as “OTO no fūkei” ［landscape of sound］in Japanese. The soundscape concept, however, does not simply mean to recognize the existence of sounds in the environment and value the cultural aspects of to such sounds. The concept reminds us the beauty of the scenery which used to be familiar to us and the abundance of sounds heard in our daily lives. Moreover, this concept leads us to pay attention to the relationships built in each age between people of a certain area and the local environment through sounds and to regard such relationships as the “culture” unique to the area.

We usually rely on vision in our daily lives and tend to be unconscious about the sounds around us. The soundscape concept helps us to increase our sensitivity to sounds and to think more about them. In contrast to a “landscape,” a “soundscape” is composed of intangible things in the environment, including local history and the memories that people have about the place.

Based on the soundscape concept, I am engaged in new-type community development projects targeting real cities. Urban design used to be a process of designing an urban area in such a manner as to make it look more attractive by adding some aesthetic elements to it, but in recent urban design activities, more importance has been placed on the culture and history of the local area, which are part of the local resources, and on the relationships between the area and local people and visitors to it. In such design activities, the soundscape concept and approach, which target invisible things, are very useful. Soundscapes, which can invoke memories that people have about an area, help us to bridge the past, present and future.

We conduct fieldwork as the basis for soundscape survey and research activities. In researching the history of an area, in many cases you can see part of the history in tangible forms in the local landscapes. Sounds, however, are intangible. So how can we conduct researches on sounds in the past? In soundscape research we use the “ear witness” method. “Ear witness” is a word coined based on the word “eyewitness” and means literary works, diaries, poems, songs and other texts that include descriptions of the sounds heard in specific places. We use these as reference materials to conduct surveys on past soundscapes and to conduct research into people’s memories about the sounds.

Did you know that lots of great writers had their residences in Shibuya? For example, in the Meiji period, Yosano Akiko lived with Yosano Tekkan in Dogenzaka, Shibuya, where she brought out Midaregami (Tangled Hair), a collection of her tanka poems. In the letters she wrote when living in Dogenzaka, we can find descriptions of “sounds,” such as “I picked up the chestnuts that had fallen to the ground” and “I heard the sounds of people and carts going up and down the Miyamasu-zaka slope.” Also, Kunikida Doppo had his residence near the present site of the NHK Broadcasting Center and he described the sounds heard from the local grove of mixed trees in his book titled “Musashino.” 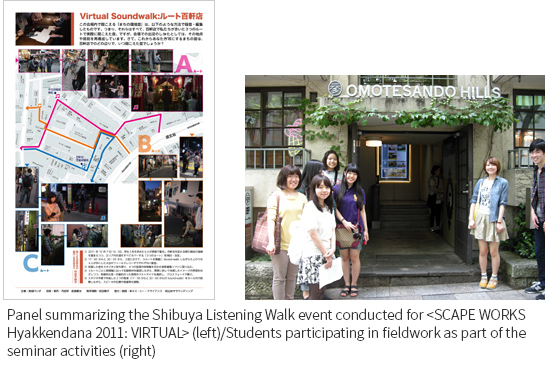 These days Shibuya is crowded with young people, but visiting various places in Shibuya after reading the descriptions of sounds included in works of literature such as those as mentioned above, you will recognize how the places have changed from what they were in the past and also think about the future of Shibuya. I include this “Shibuya Listening Walk” activity in the seminar activities to be conducted by my students. In soundscape research, sounds guide researchers to learn about the place, its environment, and people who have heard sounds there.

Even being in the same place, people will hear different sounds and come up with different interpretations of what they have heard. For Shibuya too, the students, as mentioned above, have proposed different walking routes according to their individual interpretations of the city. In the process of making such proposals, you can also learn how interesting it is to walk around Shibuya in a group of people and how important it is to communicate with each other. 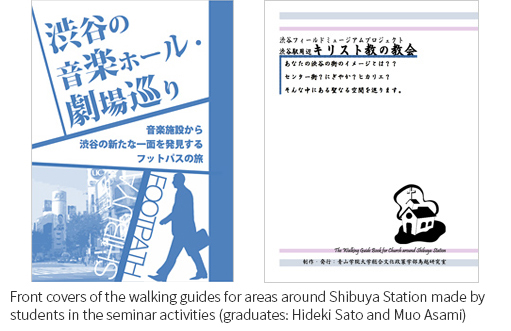 Redevelopment projects have been implemented in and around Shibuya Station, but I do not want Shibuya to be a city that is similar to Shinjuku and Ikebukuro. The diversity of local areas adds more appeal to the city, and so we have been carrying out a project called “SCAPE WORKS” in the area called “Hyakkendana,” which is located on the right side of the upper part of the Dogenzaka slope, since 2009.

From the latter half of the 1950s to the early 1960s, Hyakkendana was a destination for local people wanting to see movies in Shibuya. During the 1960s to 1970s, the area was the Mecca of subculture accommodating numerous cafes where you could listen to music, such as classical music and modern jazz. The deeply embedded culture of Shibuya made the city more attractive and we can find the vestiges of it still present in the area. In the SCAPE WORKS Hyakkendana project, we search for these vestiges and send information about them in order to have Shibuya’s unique characteristics and culture reflected in the redevelopment plans for the city. It is an art-driven community design activity. 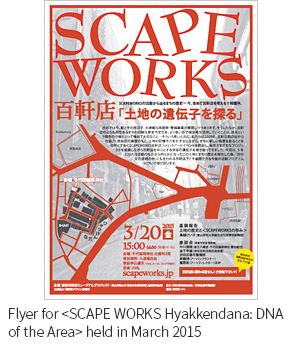 Things, experiences and connections born out of soundscapes

Just as landscaping means to design and create garden and scenery, soundscaping means to create sounds and take an acoustic approach to environmental design. In the following I will introduce a case in which I designed a garden by taking a soundscape approach and outline a related project.

The Rentaro Taki Memorial Museum, in Taketa City, Oita Prefecture, is the old house where Rentaro lived during his childhood, which was renovated to become the museum. Nearly 30 years ago, I was requested by the late architect Yasufumi Kijima, who was a professor at Kumamoto University at the time, to design a garden for the museum by attributing importance to the acoustic environment.

In order to meet this request, I first conducted a research on the sounds heard by Rentaro in his childhood in the garden of the old house. I visited the old house again and again to investigate the environment surrounding the building. I also interviewed local people and those who had had some kind of relationship with Rentaro about the sounds heard around the house in his childhood, while perusing written materials about his daily life.

As a result, I found out that Taketa, as a castle town, had been a cultural center with a refined atmosphere—a “little Kyoto in Kyushu.” As the name “Taketa” implies, the town has lots of bamboo (take) forest and there was a bamboo grove behind the house of Rentaro’s family. The house was therefore surrounded by the sounds of bamboo being bent by the wind and the sounds of leaves blowing in the wind. Small birds such as sparrows and Japanese nightingales visited the house’s garden and a fox family lived in a space under its floor. In the course of the research I was also able to hear a story about a yokai (supernatural creature) called “Osan,” which had sometimes made bubbling sounds in the Mizogawa River flowing in front of the house.

Based on the results of the survey, I designed a garden for the museum, making it one with lots of bamboo and with stone stairs leading to the hill behind the building, thereby reproducing the sounds of bamboo heard by Rentaro when he was a child. I also designed the garden to have fruit trees to attract small birds and to have a small cascade of water drawn from the Mizogawa River so that the sounds of flowing water could be heard even inside the museum building. Also, because people usually wore geta sandals when Rentaro was a child, I made it possible for visitors to the museum to walk around the garden wearing geta, making sounds as they walked on paths paved with locally procured stones. They could thereby have a hands-on experience of the sounds heard by Rentaro during his childhood in the garden.

As a project related to the garden design, I was also engaged in the creation of the “Taketa Rentaro Map,” which shows the places frequently visited by Rentaro in his childhood, namely, locations where he encountered various sounds, to visitors to the museum. I was requested by Taketa City to make such a map three years ago, and now a brochure including the map and other materials are available at the museum. By using sound as a medium, the project for the Rentaro Taki Memorial Museum was thus expanded to target the entire local community. In other words, the project for the garden, which was a closed space within the premises of the museum, was expanded beyond the boundaries to target Taketa as a whole. 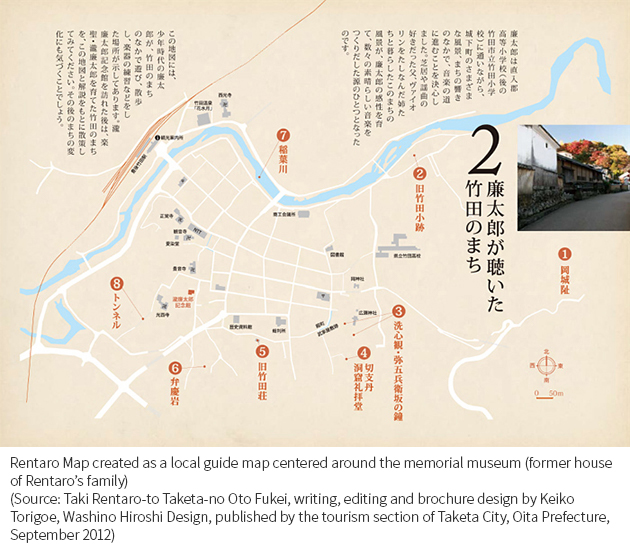 In the project <SCAPE WORKS> it was revealed that Hyakkendana in Shibuya had been the place where Nakagawa Hisanari, the last lord of Taketa, spent his final days. As proof of this, the inari shrine that was located within the premises of the house of the Earl of Nakagawa is now located in the Chiyoda Inari Shrine as the “Nakagawa Inari.” (The inari shrine was moved from the premises of the house of the Earl to its present location after the house was sold to Hakone Tochi, the predecessor of a Seibu affiliate.)

Although Taketa and Shibuya are far away from each other, the two were found to have an unexpected connection. In the <SCAPE WORKS Hyakkendana> held in 2013 we therefore invited the mayor of Taketa City to Shibuya and introduced visitors to the “Chikuraku” event held in Taketa City, where as many as 20,000 bamboo lanterns are lined up.

Each place has its own history and memories. By adopting the soundscape concept, we can take various approaches to environmental and cultural resources that tend to be forgotten. I would like to communicate how interesting it is to conduct research based on the soundscape concept to more people, including students.

School of Cultural and Creative Studies