What comes to your mind when you hear the word “philosophy”? I presume many of you have the impression that philosophy is “difficult to understand,” “useless,” or “not my cup of tea.”

Philosophy, in fact, may be something far more relevant to you than you realize, and may be all the more difficult to understand for this very reason. To give you a hint of what philosophy is, I would like to share with you my primal philosophical experience as an elementary school pupil.

In my early years at elementary school, I learned that a classmate of mine was moving to Kyushu with his family. Everyone in the class felt sad about not being able to see him anymore, and we told him how much we would miss him. Just around that time, I was taken to the funeral of an acquaintance of my parents. There too, all the adults were talking about how sad they felt about not being able to see the deceased anymore and how much they would miss the person.

For an elementary school kid, a parting due to relocation and a parting due to death were no different in that you could no longer see the person. As I gazed at the grieving adults at the funeral, it was hard to swallow why death made people so sad. My perception of death may have affected how I felt about the two partings.

However, when I told the adults around me that moving far away and dying are the same thing, they, looking a little angry, dismissed my notion, saying, “They are completely different.”

They would explain it to me by saying, “The difference is whether there remains the possibility of seeing the person.” The rationale was that I had no chance of seeing a deceased person, but I could see my friend if I wanted to, as long as he was alive.

Not being a docile child by nature, I was not convinced by this explanation. In my view, even if I could see my friend if I wanted to, not seeing a deceased person and not seeing my friend were no different unless I actually saw my friend. (Indeed, I never got to see him after he moved.)

This is what I can refer to as my primal philosophical experience. Now that I have grown up and continued with my exploration in philosophy, I can delve further into this issue. For example, I can ask myself, “Is it appropriate to perceive the possibility of seeing the deceased person in the afterlife and the possibility of seeing my friend in Kyushu as on the same level?” or, “With regard to my friend far away, I feel he exists in the same space or time as I do, but what about in the case of a deceased person?” However, let’s leave this issue aside, because my primal philosophical experience alone provides us with enough key characteristic elements to help us explore what philosophy is.

One of the key elements in practicing philosophy is “altering one’s perspective and turning it around.” You could rephrase this as to “doubt” or “reexamine” one’s perspective. Differences that adults take for granted (e.g., the difference between separation due to transferring schools and parting due to death) become obscure when seen from another perspective. And even if you manage to differentiate between the two by altering your perspective again, the line you have identified once more becomes vague when you again change your viewpoint. Instead of trying to be a docile and straight-line thinker and to draw quick conclusions, you should intentionally hit pause and ponder the issue. Do this again and again and keep updating the landscape you see. Such a process of thinking constitutes the basis of philosophy.

The other key element is to take conscious twists and turns in your thinking. Docile and straight-line thinkers are rarely aware of their own stage or any order in their thinking process. However, as depicted in the case mentioned earlier, there are purposeful twists and turns in one’s thinking process, meandering from “clearly differentiating” between the two kinds of parting, to “regarding them as the same,” reverting to “differentiating them,” and then bouncing back to “viewing them as the same.” Intentionally zigzagging between completely opposing ideas diversifies and broadens your thoughts. The deliberate oscillation from side to side is another basic characteristic of philosophy.

Philosophy is thus the challenge of pursuing an answer that may not even exist by relying solely on the capacity to think tenaciously, and vividly describing the practice.

What’s the use of philosophy?

I know from experience that there are many people who ask, “What’s the use of philosophy?” Let’s think about the question itself by injecting a bit of philosophy into it.

People who ask, “What’s the use of philosophy?” usually demand a specific answer (e.g., “Philosophy is useful for so and so”) or anticipate a complete negation (e.g., “Philosophy is absolutely useless”). However, from a philosophical point of view, giving an answer that falls under neither of these two types of answer would be more interesting. It may also be a good idea to respond with a question—such as, “What do you mean by ‘use’?” or “What do you think determines whether something is useful or not?” You may consider that answering a question with a question is unfair, but this is one way of starting on philosophy.

However, to “think philosophically,” you had better not readily accept such implicit criteria. Instead of giving a “smooth” answer that satisfies the questioner’s anticipation, you should intentionally pause and ponder the question.

In a nutshell, in hastily questioning the usefulness of philosophy, the questioner has a concealed preconception that he/she is capable of making a proper judgment about the usefulness of things (which is a kind of egoism). “The questioner” may not necessarily be a single person but may represent “all of us living in the 21st century” or “all of us who wish to make money.” Whomever it may be, the “questioner(s)” is (are) convinced that he/she/they has (have) the capacity to make a proper judgment. Philosophy starts with doubting whether the “questioner(s)” is (are) really in a position to decide whether philosophy is useful or not.

There are presumably many people who dislike or avoid those who think in this way, possibly saying something like, “Stop mumbling and just give me a clear and straightforward answer.” Conversely, there is a minority of adults and children who feel stressed out living among such a majority of people. As you may have guessed, philosophy is also useful for this minority, who feel suffocated by what the majority take for granted. For some types of people, philosophical thinking can be a window of relief through which they can breathe in some fresh air. Only, this kind of “answer” is convincing solely for such a minority and does not constitute a proper “answer” for the majority. 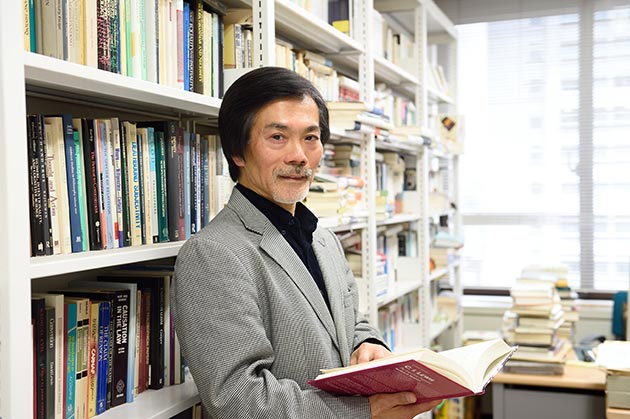 I took up wrestling at the age of 51. I am still an active wrestler and also serve as the director general of the university’s wrestling club. I have always thought that wrestling and philosophy have common characteristics.

Wrestling is a combative sport where near-naked wrestlers try to gain a “fall,” which means to pin the opponent’s shoulders to the mat. As such, wrestlers’ natural physical ability becomes apparent. The word “wrestle” not only means to engage in wrestling as a sport, but also to grapple with the opponent in general, including in other sports. In other words, while wrestling is an established genre of sports, it is also a universal action woven into other combative genres.

Unlike other specialty fields such as history and physics, philosophy hardly uses any specific technical knowledge or methodologies, but instead takes on challenges “bare-handed,” using the philosopher’s natural ability to think. The dialogues I had as a child with adults are just one small example. Philosophy and wrestling are similar in that they are both “fought” mostly with plain and natural ability. It can be said that in wrestling, natural physical ability is required, while in philosophy, natural thinking ability is required. Moreover, although a humanities subject, philosophy has also deeply permeated other subjects and fields, at times inconspicuously constituting their foundation. In short, philosophy is a field of its own but, at the same time, represents universal elements that seep into and operate in other fields. Such dualism is another similarity shared by philosophy and wrestling.

Furthermore, in philosophy, unlike in debates or quarrels, dialogues aim not at reaching a black or white conclusion but at enjoying how the seemingly definitive conclusions are reversed over and over again, ushering both parties to a new stage. The dialogues between me as a child and adults and the dialogues over the usefulness of philosophy are small examples. In wrestling too, when you watch an intense episode of sparring, a routine training exercise for wrestlers, you will see that the essence of the sport lies in the pleasure and pursuit of the repeated reversal of “black and white” presented in the language of the body. This is also how philosophy and wrestling closely resemble each other.

Comparing philosophy and wrestling, seemingly two very different things, observing them from a distance, and trying to exhaustively identify their commonalities is yet another example of a thought process in practical philosophy.

There have been no related items yet.

There have been no related items yet.