How Is Taira no Kiyomori Depicted in the Tale of the Heike?

NHK’s year-long historical “Taiga drama” series in 2012 is “Taira no Kiyomori.” However, while it is understandable that this period is less known than the Sengoku (warring states) period or Bakumatsu (end of Shogunate) period, I was honestly shocked to learn that some people have no idea who Taira no Kiyomori even is. The TV series is expected to present Taira no Kiyomori as a hero who became the first samurai to wield the highest level of political power in Japan and took on the challenge of pioneering a new era. This, needless to say, is a fiction, but this kind of historical television drama is produced on the basis of historical facts and literature by referring to various history books and literary works. For the “Taira no Kiyomori” TV series, one of the most important such reference materials is, no doubt, Heike Monogatari, or the Tale of the Heike.

The Tale of the Heike starts with the famous opening that everyone must have read or heard at least once: “Gionshoja no kane no koe, Shogyomujo no hibiki ari” (The sound of the Gion Shoja temple bells echoes the impermanence of all things). The tale is about why the Taira clan, who at one time reached the zenith of prosperity, was destroyed. The first six books tell why the clan fell and attribute the reason to misdeeds of Kiyomori, while the latter half of the tale traces how the clan had to pay for Kiyomori’s wrongful acts.
The person who exerts a great influence throughout the tale is Cloistered Emperor Goshirakawa. Although Goshirakawa seldom appears directly in the tale, the story unfolds centering on the characters’ relationships with him. Those who are on the side of Goshirakawa are depicted as on the side of justice. Kiyomori maintains a good relationship with Goshirakawa at the beginning, but their relationship quickly sours in the late 1170s soon after the tale starts. When this background is taken into account, the misdeeds of Kiyomori can be interpreted simply as acts not in favor of Goshirakawa. For instance, Kiyomori incarcerates Goshirakawa (“Hoo nagasare” Book 3), but Kiyomori never harmed him. Kiyomori also relocates the capital to Fukuhara (“Miyako utsuri” Book 4), but, as Masaaki Takahashi, who is in charge of researching historical accuracy for the Taiga drama, points out, Kiyomori’s intention was perhaps to open up a new, more prosperous era by realizing his grand plan for trade between Japan and the Song dynasty.
In the Tale of the Heike, regardless of historical facts, Kiyomori is certainly portrayed as an evil man. The tale does not just focus on slandering him but attempts to present him as an outsized, mysterious figure who is larger-than-life and beyond the imagination of an ordinary person. Let us now examine the Tale of the Heike and see how the Taira clan fell.

How Are Different Ways of Living and People’s Nature Depicted? 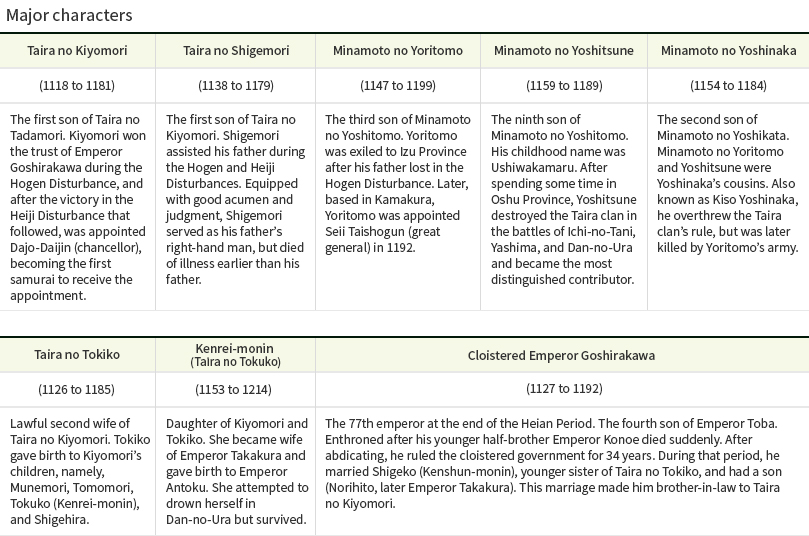 The first half of the tale illustrates the life of Taira no Kiyomori from the time he climbs his way up the ranks to bring the Taira clan to the height of its prosperity, thereby arousing antipathy from various quarters, until his death from fever. In this first half, many evil deeds performed by Kiyomori are related, but some of them are fictitious.

“Sukemori—Kiyomori’s grandson (Shigemori’s second son)—encountered a procession of Fujiwara no Motofusa, the regent, but did not show courtesy by dismounting from his horse. So he was dragged down from his horse and humiliated. Kiyomori was outraged and retaliated against Motofusa by ambushing the procession.” (“Tenga no noriai” Book 1)

From this episode we get the impression that Kiyomori is autocratic. But the fact was, as the historical record clearly shows, that it was not Kiyomori but Shigemori who actually retaliated against Motofusa. Shigemori is portrayed as a man of great morality and with good judgment who acts as a brake on his father’s excesses. As Shigemori dies early, his father Kiyomori starts running out of control. However, the fact that he retaliated against Motofusa because he was disgraced may change the image we have of Shigemori.

“Shunkan, who served Goshirakawa as a close aide and the administrator of a large temple called Hosshoji, was found to have plotted against Kiyomori and exiled to Kikaigashima island. Left alone on the island, Shunkan wailed and thrashed his arms and legs about like a baby and begged not to be left alone.” (“Ashizuri” Book 3)

Shunkan was once a monk respected by everyone as the head of a prestigious temple. However, left alone on a remote island and in an extreme situation where his life is endangered, he cries over his helplessness fretfully and unashamedly. This is very miserable but may be what human beings are intrinsically like. In this way, the tale brings the inherent human weaknesses of the characters to the fore and renders them as feeble beings. Interesting, wouldn’t you say?

Hesitation to Kill, Preparedness to Die, Demise of the Taira Clan

Many famous episodes of the Tale of the Heike can be found in its latter half, which traces the fall of the Taira clan after the death of Kiyomori.

“As the Taira clan’s army breaks into a stampede and starts to flee, Kumagai Naozane, a warrior with the Minamoto force, calls back a young samurai who was trying to escape into the sea, holds him down, and is about to slash his throat. But the moment Naozane sees the samurai’s face, he hesitates. The samurai is a very graceful noble man who looks about the same age as Naozane’s son. But he decides, in tears, to cut the samurai’s throat so that he can at least say memorial prayers for the samurai before other warriors in the Minamoto force arrive. The young samurai was Taira no Atsumori, the youngest son of Tsunemori, one of Kiyomori’s younger brothers.” (“Atsumori saigo” Book 9)

This kind of account about a warrior hesitating to kill his enemy is probably very rare among classical war literature from around the world. The description in the original text of the moment Naozane sees Atsumori’s face and feels hesitation is truly stunning. Written in such an old era, the tale already explicitly renders the inhumanity of killing and wars. This is why the tale is a literary work that we Japanese can proudly hold up to the world.

The scene below may be familiar even for those who do not know much about the Tale of the Heike.

“The battle of Dan-no-Ura. As the defeat of the Taira clan is almost certain, Tokiko prepares herself to die. She holds her eight-year-old grandson, Emperor Antoku, and says to him in tears, ‘There is another palace at the bottom of the sea.’ They then jump into the sea.” (“Sentei minage” Book 11)

It is generally known that Tokiko told Emperor Antoku there was another palace in the sea before they threw themselves in, but this may not be exactly correct. For Tokiko, Gotoba, who was enthroned in the imperial palace in Heiankyo without Sanshu no Jingi, or the Three Imperial Regalia, was an illegitimate emperor. The true emperor was Antoku alone, and therefore the place where Antoku was, was the palace. So what she meant to say before jumping into the sea was that the bottom of the sea where they were going was going to become the palace. Thus Tokiko died claiming that they were the only legitimate government.

The Tale of the Heike is thought to have been created by around the 1230s, after the destruction of the Taira clan in the 1180s. The war between the Minamoto and Taira clans was of great interest to the people of the time, and the drama of the war was narrated with lute accompaniment by biwa-hoshi, or traveling lute priests, who were like the mass media of their time, and it became a popular story. It is said that these narratives, as well as materials similar to diaries about the Minamoto and Taira clans written by nobles and other literature, were compiled together into the Tale of the Heike. Created based on various sources, each scene of the tale has a different style of writing and the text has its own rhythm, while each episode is complete, making every episode appealing in its own way.
The tale has been attracting interest since the era of the Minamoto and Taira clans and has crossed over from the genre of medieval literature to become a popular theme among a wide variety of media. The episodes are performed as Noh and Kabuki theater programs, and the tale is adapted for TV dramas, movies, animations, and manga, resulting in the emergence of many different versions of the tale.
Oda Nobunaga, a warlord in the Sengoku (warring states) period, was particularly fond of “Atsumori,” a Kowakamai performance with storytelling and dance. In a scene of this dance drama created based on the “Atsumori no saigo” (Book 9) chapter of the tale, Kumagai Naozane, who repented for killing Atsumori and entered the priesthood, despairs of life in the following line:

“Ningen gojunen, Geten no uchi wo kurabureba, Yumemaboroshi no gotoku nari” (A man’s life of 50 years under the sky is nothing compared to the age of this world. Life is but a fleeting dream, an illusion).

This line is known widely and may be mistakenly perceived by some as Oda Nobunaga’s words. But the line actually comes from a work spun off from the Tale of the Heike.
In the Edo period, Joruri and Kabuki plays titled “Heike Nyogo no Shima,” in which Shunkan, who appears in the chapter “Ashizuri” (Book 3), is the main character, were also created. Among modern authors, Ryunosuke Akutagawa and Kan Kikuchi also wrote works titled “Shunkan.” Interestingly, while Shunkan in the Tale of the Heike is totally miserable, Shunkan in the Kabuki play and in Akutagawa and Kikuchi’s books is portrayed as admirable. The same character is often depicted differently among different works, reflecting changing views and perceptions over time. This is another very interesting point.
I hope that this column helps you become interested in the Tale of the Heike, which has been a fixture of Japanese culture for more than 800 years. Because, as mentioned earlier, each episode is complete, you can choose and read only episodes you are interested in. Please read the tale episode-by-episode and discover for yourself why the tale’s popularity has endured for many years.