Was the Constitution imposed on us?

What sort of image do you have of the Constitution? Many of you might think that it does not have much bearing on you and is something complex.

On July 1 this year, the government made a Cabinet Decision to revise the interpretation of the Constitution to enable the exercise of the right of collective self-defense. This was followed by fierce debates and huge demonstrations taking place around Prime Minister’s Office.

There are roughly two arguments for why the Constitution should be amended. One is that Japan needs an independent constitution. The other is that amendment of Article 9 is required to enable the exercise of military power. Some argue both.

Then, was the Constitution really imposed on Japan? During the process of establishing the Constitution, the U.S. made a draft, Japan made some changes to it, and this was passed as an amendment to the Meiji Constitution in accordance with the procedure set out in there; as such, there are no problems in terms of the formalities.

The Constitution was drafted by U.S. army officers of the Government Section of the GHQ and civilians, and no constitution specialists were involved. Therefore, before drafting, they needed to collect materials. They visited libraries all over Tokyo and collected the constitutions of various countries. In fact, the constitutions of European countries as well as United States Constitution were referred to, and the draft was composed with flexible thinking different from the thinking of specialists. Thus, the Constitution includes human rights protection provisions in the area of social security and women’s rights, which were of a cutting-edge level at that time.

Most importantly, the Constitution has been supported by a sovereign people for around 70 years since its enforcement.

What purpose does the Constitution serve?

For many of you, it might be hard to imagine a situation where human rights are restricted and oppressed by the power of the state. Not a few of you would think that a situation of the sort could not arise around you.

If this applies to you, remember the case involving remotely controlled computers in 2012.

In this case, threats of indiscriminate murders and attacks on elementary schools were posted online, and following an investigation of the IP addresses, four men were arrested. However, later, it transpired that the computers of the four arrested men had been remotely controlled by someone else. Then, a person calling themselves the real culprit sent emails claiming responsibility to the lawyers in the case and professed involvement in the case, which led the Metropolitan Police Department to admit that they had wrongly arrested the four men.

The police admitted their mistakes in this case; however, the case illustrated that it was possible for the police, with the strong power of the state to fall back on, to arbitrarily punish an innocent person as a criminal, and in this respect, the case greatly shocked people. Furthermore, what is frightening about the case is that this could have happened to anyone who use computers.

The Constitution, in this sort of scenario, restricts the exercise of the power of the state and protects the rights and freedoms of people.

I suspect that thus considering the essential aspect of the Constitution, the procedure taken by the Abe administration to enable the exercise of the right of collective self-defense might seem questionable to many of you.

Let us consider problems around us in view of the Constitution

As has been shown above, the Constitution protects the rights and freedoms of us people and is closely connected to our lives. Let us consider two issues which matter to us in view of the provisions in the Constitution.

The preamble of the Constitution provides that “We recognize that all peoples of the world have the right to live in peace, free from fear and want.” “Peace” here means not only a situation without war but also a situation where people can live peacefully without threats against everyday life including illness, famine, poverty, violations of human rights, or disaster.

It has been over three and a half years since the disaster at Fukushima Daiichi Nuclear Power Station, but it can be argued that there is a continuing infringement of the important constitutional rights of the victims of the nuclear disaster including the right to the pursuit of happiness (Article 13), the freedom to choose and change their residence (Article 22, paragraph (1)), the freedom to choose their occupation (Article 22, paragraph (1)), the right to life (Article 25), and the right to property (Article 29). How do you view this issue? 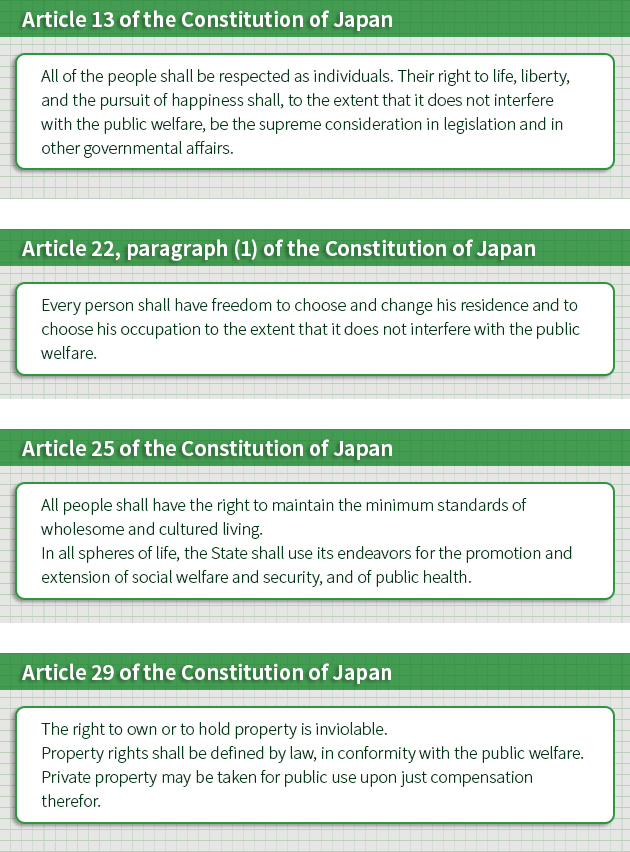 Let us consider the second issue of the legality of online sales of over-the-counter drugs.

In January, 2013, the Supreme Court ruled that the Ministerial Order of Ministry of Health, Labour and Welfare prohibiting online sales of pharmaceuticals is unconstitutional, which led to lifting of the ban on online sales of over-the-counter drugs.

At the same time, in view of Article 25 providing “All people shall have the right to maintain the minimum standards of wholesome and cultured living,” it can be argued that online sales, where enough information on the risk of side effects might not be communicated, are unconstitutional.

In fact, this was a divisive issue in my seminar. While those who have relatives who suffered serious health damage from medicines would feel uneasy about easy access to medicines, mothers of young children would naturally wish to obtain medicine as quickly as possible. Opinions vary according to the position one is in.

In the modern society we live in, there are various problems, many of which are difficult to judge.

I suggest you make a habit of considering where you stand on problems like this in view of the Constitution when you become aware of them through the media. This will make you aware that the Constitution, which has seemed distant, is actually the law closest to us.