Shakespeare’s plays including Hamlet and The Merchant of Venice are still performed in many countries and are well known in Japan as well. Although purists read them as plays, his works have also become much more: they have inspired films, paintings and music, and are thus expressed through various artistic mediums.

According to a survey conducted by the British Council, an organization that promotes British culture around the world, targeting 5,000 young people from Brazil, China, Germany, India, and the U.S, the name most strongly associated with the U.K. is neither that of Queen Elizabeth or David Beckham, a former member of the English national football team, but, surprisingly, Shakespeare.

The year 2014 is the 450th anniversary of the birth of Shakespeare and 2016 is the 400th anniversary of his death. In commemoration of the playwright’s 450th birthday, Shakespeare’s Globe of London, as befitting the name Globe, has taken its production of Hamlet on a two-year world tour, visiting over 200 countries.

As such, Shakespeare will doubtless be a global phenomenon for the next few years. Why not take this opportunity to familiarize yourself with the appeal of Shakespeare? 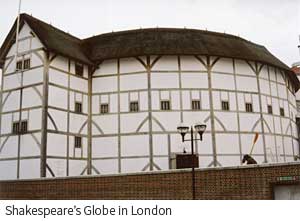 Why does Shakespeare’s appeal transcend time and geography?

Spanning 400 years and many countries, Shakespeare’s fans and supporters are countless. Wherein lies the attraction?

The chief attraction is that Shakespeare deals with universal themes. Most of his works are based on famous stories passed on by the people. The works have at their base inherent human emotions that have remained unchanged, such as feelings around life and death, love and hatred, and encounter and separation, and are therefore open to various interpretations and liberal expression. Thus, they are refashioned as modern art pieces and appeal to people all over the world.

There is an area of Shakespearean research called “textual criticism,” which, simply put, is concerned with what the real words written by Shakespeare are. This might be surprising, but none of the manuscripts written by Shakespeare himself still exist. In the 18th century and later, using the quartos published while Shakespeare was alive and the First Folio published after his death as the only source materials, a series of revised editions of Shakespeare’s works were published in succession in the U.K. On these occasions, parts where the meaning did not come across were judged as misprints and revised (or sometimes altered).

Also, the works were widely translated. In Japan, after the Meiji era, translations of a superior quality emerged. Various translations of the well-known line from the tragedy Hamlet, “To be, or not to be, that is the question,” appeared as can be seen below.

Plays had been composed in verse since the age of the ancient Greek tragedies. In other words, plays were generally “poetic drama.” Shakespearean plays are no exception. Nearly 80% of his lines are written in “verse.” It is an extremely difficult task to reproduce the poetic beauty of a source text including its lyrical charms and word choices in Japanese.

Due to the aforementioned background, Shakespeare’s works, vigorously taken up by writers, translators, directors, and actors of later generations, were interpreted in various ways. This is why there are a number of novels, plays, performing arts (kabuki, kyogen plays, and rakugo) pieces, music and paintings inspired by his works. Shakespeare’s works, as artistic contents, pose a worthy challenge for those wishing to express themselves.

What sort of life did William Shakespeare lead? The existing sources give only a vague picture. This is not to be wondered at, however, considering that he lived more than 400 years ago. He lived in the age of Queen Elizabeth, when England stood above Spain and became a great power.

Shakespeare was born in Stratford-upon-Avon, Warwickshire, in the West Midlands. Stratford-upon-Avon was a quiet pastoral area on the Avon, featuring hills surrounded by elm trees. John Shakespeare, William’s father, was a glover and leather worker. There is a record that shows William was christened on April 26, 1564 as the third child of eight and the oldest son.

Shakespeare’s name next appears in the biographical record in 1582, when he was 18 years old. While at that time the banns had to be read at the Sunday service three times in a row before a marriage could take place, a request was made to let him marry after one reading of the banns. The bride was Anne Hathaway, from a nearby village. So why is it that Shakespeare wanted only one reading of the banns? It is because, to use a modern expression, theirs was a shotgun wedding. Their first daughter Susanna was born next spring. This was followed by the birth of the twins Hamnet and Judith, so that at the age of 21, Shakespeare was a father of three.

After that, there is a blank period of around seven years in the biographical record. There are various tales from the period, however, one of which says that Shakespeare, after poaching a deer on the grounds of a local squire, fled to London to avoid an uncomfortable situation. After this period, the name Shakespeare reappears in an unexpected source: a text written by a fallen playwright referring to Shakespeare in a sarcastic manner. The text reads, “an upstart Crow, beautified with our feathers . . . is in his owne conceit the onely Shake-scene in a countrie.” It has been thought that the expression “Shakescene,” which means to shake a scene, is an undisguised insinuation against the name “Shakespeare.” Thanks to the abusive comment by the senior playwright, the existence of the playwright Shakespeare is confirmed.

Although there are several theories regarding this “lost period,” by around 1592, when the above text was published and Shakespeare was 28 years old, Shakespeare was already actively writing plays. 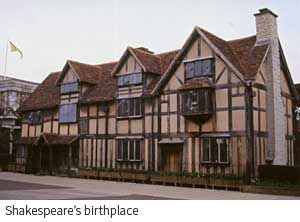 Shakespeare was a writer, actor, and co-owner of a playing company called the “Lord Chamberlain’s Men” (later to become the “King’s Men”).

While formerly it was commonly believed that he wrote 37 plays in his lifetime, now the number is believed to be 40, including co-productions. Categorized into three genres—“Comedies,” “Histories,” and “Tragedies”—the works are collected in the First Folio, the first complete edition published in 1623, seven years after his death.

Comedies are mostly love comedies and end with a wedding scene. The plays are set in a time and place remote from London and the Elizabethan age so that the festivity of love is underlined. They are full of great lines that touch the heart such as “if music be the food of love, play on” in Twelfth Night. Characteristically, female characters have an active role. As in The Merchant of Venice, where Portia outwits the Jewish antagonist Shylock in the court scene, smart and intelligent heroines receive applause.

The histories are largely works based on the Wars of the Roses, in which the English aristocratic families, the houses of York and Lancaster, fought for the English throne under the white rose and the red rose. Back then, memories of the civil wars were still vivid in people’s minds. A great line from Richard III, “Now is the winter of our discontent, made glorious summer by this sun of York,” is familiar to almost every Briton. Approximately 10% of the quotes and maxims used by English speakers in daily conversation come from Shakespeare’s works. For example, there is another line from Richard III—“A horse! a horse! My kingdom for a horse!”—which ironically describes a desperate craving for something worthless. These lines have become so common that they spring to the lips even when the source is unknown. A Japanese equivalent would be “Osokarishi Yuranosuke” (Too late, Yuranosuke) (a line from the kabuki play Kanadehon Chushingura).

Lastly, there is the genre of tragedies. The best-known works include the Four Tragedies: Hamlet, Othello, King Lear, and Macbeth. The Shakespearean tragedies can be summarized as follows: the protagonist, due to an internal evil and weakness, commits an irretrievable error; as a consequence, the protagonist causes a situation where the order of the world is shaken and they lose their lives but, in the process, achieve philosophical self-recognition. The climax is where the protagonists awaken to the truth even as they fall. The lines where the perspectives on life that the protagonists have come to know are crystallized in condensed expressions are truly marks of the genius of Shakespeare. A line from Macbeth, “Life’s but a walking shadow, a poor player that struts and frets his hour upon the stage and then is heard no more,” is a case in point.

The above has looked at who Shakespeare was and the appeal of his works. However, the best way to approach Shakespeare is “to see a performance.” You are heartily recommended to go to a theater and get the full sensory experience of Shakespeare.

In Japan today, there are lots of accessible performances of Shakespeare that interpret the plays with a young sensibility. Let’s forget the difficult stuff for now and enjoy this extraordinary world. If you then think, “Shakespeare is pretty interesting,” you are already a fan. 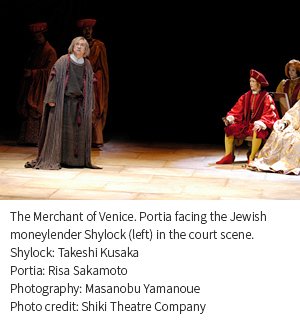