Intercultural communication between Japanese and Chinese

Interpersonal relationships take place in various contexts, such as family or kinship relations, friendships, working relations and others. Occasionally, these relationships become difficult to manage, as many of us know from experience. We, usually unintentionally, hurt the other’s feelings and vice versa, which occurs even in regard to intimate associations between close family members and friends, often impairing confidence in our mutual knowledge and understanding.

Interpersonal relationships are built through interpersonal communication, and the outcomes of this activity are significantly influenced by cultural and linguistic background factors, with the general rule being the closer participants are culturally, the better the outcome. However, even between people born and raised in similar environments, such as in the same country, communication gaps do occur. Is there anything we can do to overcome this issue and achieve better communication? Yes, there should be. To deal with this challenge effectively, we will start with discussing intercultural communication.

At Aoyama Gakuin University, we have developed an intercultural communication project between Japanese and Asian university students, with the objective of building up a better understanding of each other through focusing on the intercultural communication “gap.” As part of the project, we organized a program in cooperation with Beijing Normal University in which students from the two universities viewed and listened to the same movie and narrative and exchanged opinions on the two materials. 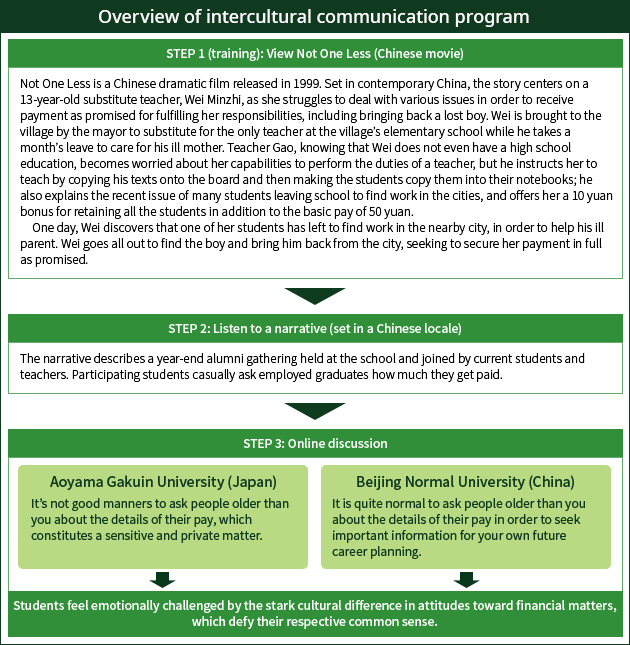 The program adopted the Chinese drama Not One Less, which centers on a 13-year-old substitute teacher, Wei Minzhi, scrambling to bring back a boy who has left school to go find work in the nearby city, a problem subject to the pay-cut penalty. The program also introduced a reading narrative set in a Chinese school reunion, where current students ask employed graduates how much they make.

Prior to the cross-border discussion with Chinese students, a session was organized just for Japanese participants to let them talk about the film. The preliminary session highlighted the Japanese negative view on openly talking about money, reflecting the traditional “dirty” image associated with money management. As such, once the international session started, many Japanese students felt shocked to find Chinese students speaking about money frankly and openly. However, as the discussion progressed, Japanese participants became less certain about the reasons for avoiding the topic in Japan, feeling uncomfortable even in face of the issue they had discovered. These emotional experiences resulted from the intercultural communication activities, which can serve as a powerful psychological instrument to shock participants into questioning their own common sense.

Following the debate on the movie, the same groups of students started a discussion based on the Chinese narrative, which went on over a period of weeks. In the early stages, each group felt almost offended by the other’s opinions, expressing themselves frankly to each other. Yet, in the course of time, participants were gradually influenced by the ongoing interaction, becoming less confident in their long-held beliefs. It is likely that the other party has begun to sound logical, even more logical than you; yet you are still feeling slightly uncomfortable with their rationale. Exploring approaches to effective intercultural communication, we attach great value to the above-described subtle sense of discomfort or strangeness felt by individual participants while understanding the other’s reasons. For our purposes, this is more important than simply aiming to reach a mutual understanding.

The importance of being aware of a feeling of otherness

Seeking a key to addressing intercultural communication issues, I look at the importance of participating individuals experiencing a feeling of strangeness or a sense of discomfort, as participants in our program did. Once engaged in interpersonal communication, you will almost inevitably be faced with a feeling of strangeness stemming from a gap in relation to the views and behaviors of the other party, and yet will strive to find common ground for understanding to achieve effective outcomes. More simply put, interpersonal communication requires considerable efforts to deal with the feeling of otherness. Particularly for intercultural communication, you should prepare yourself for the possibility of receiving unimaginable reactions from the other living in cultural environments almost unknown to you, and should continue groping toward a shared understanding. It certainly is not easy to bridge deep-rooted cultural differences; nonetheless, you will continue to make persistent efforts, looking for possible common ground from a new perspective. These efforts are often easier to pursue between geographically distant cultures―Japan and African countries, for instance―than neighboring countries. Many Japanese tend to mistakenly believe that they have much in common with Chinese and Koreans simply because of geographical closeness and driven by Asian regionalization. This may in fact be a cause of stagnant communication between the East Asian nations.

The above-described incorrect assumption of mutual understanding, a likely cause of dysfunctional communication regarding values and relations, is drawing the attention of some researchers looking for reasons for the recent stagnation of economic and business relationships between Japan and China. In their view, the problem lies in the self-righteous behavior of those on both sides of the border, who ignore the gap in their attitudes regarding the issue in question and are misdirected by the illusion of mutual understanding. Each party mistakenly believes they are showing adequate consideration for the other, not knowing they are doing so in an improper manner, only to make the situation worse. Even possible attempts for improvement would likely be stymied due to the geographical closeness, which might give rise to new issues in broader areas.

The background to my interest in communication gaps is my long-time sociocultural research into suspect confessions, witness testimonies and court statements in criminal cases.

One of my major research projects was related to the Ashikaga murder case. I was invited by the defense counsel to join a team to search for proof of innocence of the wrongfully convicted. We examined and analyzed investigative records, confession statements and many other documents from various angles, seeking to prove that the confession accepted as direct evidence for the defendant (Mr. S)’s guilt might not have been based on his real experience, namely, the possibility of a false confession being accepted. Two years had passed with no satisfactory approach established, when I found a likely possibility for a breakthrough in the court discourse between the prosecutor and Mr. S., which, I observed, contained a significant gap in communication.

Japan’s criminal trial practice traditionally attaches overriding weight to the criminal’s motive. Police and court interrogations are conducted with a particular focus on the motive, demanding suspects and defendants to produce detailed responses to questions regarding reasons for committing the crime, process of deciding the method, and prior planning.

During the first hearing, the interrogation discourse relating to the motive exposed some obvious communication gaps between the prosecutor and Mr. S, who had admitted the allegations in the police investigation.

In a representative example, when asked to describe the psychological situation leading up to the act, Mr. S. did not respond appropriately, saying instead “I was walking slowly.” After hours of unsuccessful efforts to produce an effective output from the dysfunctional communication, the frustrated prosecutor began to ask suggestive questions, such as, “You thought like this, didn’t you?” Mr. S just said, “Yes,” not bothering to deny it. Their verbal exchanges went on in more or less the same way, based on the interrogator’s assumed scenario, while continuing to produce more gaps that remained unfilled. During this process, details of Mr. S’s criminal conduct were inferred so as to nearly entirely fit the interrogator’s scenario, and the completed inference was accepted as convincing evidence.

The above description will likely produce an image of Mr. S suffering from a lack of communication skills and social clumsiness, which was actually our initial observation about him. In the course of time, we came up with the view that that image derives from an inherent aspect of Mr. S’s personality, a form of uniqueness associated with linguistic competence (incompetence) to respond appropriately in order to establish effective communication. Standing on this view, we reviewed the recorded speech of Mr. S under interrogation that was part of the confession accepted as valid. As a result, we discovered that the unique personality perceived when he was talking about his real experience could not at all be detected from the speech under review. Based on this discovery, we conducted additional detailed analyses and presented to the second trial court a report suggesting the possibility that the accepted confession was not based on his real experience.

Should communication gaps be filled?

One important reason we engage in interpersonal communication is for gaining and conveying knowledge about another individual, thereby building mutual understanding, and we exercise communication skills to better serve this purpose. In the course of actual communication, however, we are often confronted with various levels and types of gaps, which can be considered an inherent attribute of the interaction activity.

Communication gaps may do harm in certain situations, including investigation and trial interrogation settings, where dysfunctional communication can effect false accusation, as we concluded in relation to the Ashikaga murder case. That tragedy could have been avoided if the interrogators took note of the significance of the gaps in the early stage. Recently, efforts to prevent similar problems have begun to be promoted, mainly in the U.S. and Europe, primarily for technical development and training for preventing investigation and questioning processes from producing hazardous gaps.

In everyday situations, we generally look to have gap-free, functional communication to achieve adequate understanding; actually, however, many feel considerable stress from unsuccessful interaction efforts.

As a solution to this issue, I recommend that you make a slight change in your mindset. Specifically, stop assuming that you can easily achieve solid understanding from communication, which will help reduce stress from gaps arising. Instead, be more aware of the inherent difficulty involved in interpersonal communication―interaction between essentially separate, distinct individuals. These activities inevitably give rise to gaps able to be perceived by participants that are too resistant to bridging efforts to achieve mutual understanding.

Communication gaps do carry risks of causing seriously adverse effects depending on the situation, such as in investigative interrogation or similar settings. At the same time, communication gaps can serve useful functions in more everyday settings, particularly by inspiring creativity. Try to embrace communication gaps as an undeniable attribute of the activity, and the entire process will appear intriguingly different. You may discover that everyday conversations, even if progressing seemingly smoothly, teem with communication gaps. Despite this, you will note that the gaps do not seriously affect the process of forming interpersonal relationships. One typical example can be taken from conversations at pubs among people getting together for a drink. Participants talk about different things, and yet look very happy. People can enjoy interpersonal relationships despite significant gaps occurring in communication. I think this is a wondrous, encouraging discovery.