Tourism in Japan Is a 25-trillion Yen Industry

How often do you travel every year? According to the Research Study on Economic Impacts of Tourism in Japan 2009 conducted by the Japan Tourism Agency, the number of trips and the number of nights stayed per capita and per annum are estimated at 2.72 trips and 2.08 nights, respectively.

The total amount of money spent on travel in Japan is 25.5 trillion yen, and, as the figure on the right shows, Japanese overnight/multiple-night travel accounts for about 70% of the total. On the other hand, single-day travel, which outnumbers overnight/multiple-night travel in domestic travel, accounts for only about 20%. From this it is evident that great economic effects cannot be expected from travel with no stay over. Although various efforts have been made to attract travelers from abroad in recent years, consumption by these travelers still accounts for only about 5%.
It is often pointed out these days that Japanese are not traveling abroad as frequently as before. A bad economy may be one reason, but it is also undeniable that leisure options other than travel are becoming increasingly available and that young people are afraid of visiting non-Japanese speaking places and tend to be more inward-looking than before. The table below, which is sourced from “Passenger Car Market Trends in Japan” published by the Japan Automobile Manufacturers Association in fiscal 2008, shows that overseas travel has been falling down the ranking of products/services young people are interested in for the past 20 years. 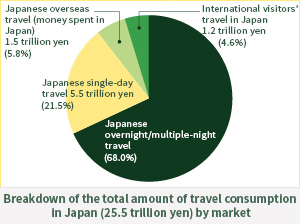 While the words “trips” and “sightseeing” are associated with fun, “travel” may sound like something involving “hardship,” such as in pilgrimages and ascetic training. As a matter of fact, the word “travel” has its origin in a word meaning painful or laborious effort. From among these and other words, the industry is promoting the use of the word “tourism” as a generic term that means both traveling as tourists and receiving tourists.
The Japanese word for tourism, “kanko” or “観光,” originates from a passage of Ekikyo, a Confucian scripture, which reads: Kuni-no Hikari-wo Miru, Motte O-ni Hintaru-ni Yoroshi (観国之光 利用賓于王). “観国之光” can be translated into “See (観) the power (光) of the country, and let (someone) see (観) the power (光) of the country,” and this is what “kanko” or “観光” originally meant. The Kankomaru (観光丸), a battleship in the Bakumatsu (end of the Edo Shogunate) period (you can now see and take a cruise on a replica of the ship at Nagasaki Port), got its name because it signified the power of the Edo Shogunate and reflected the Shogunate’s strong intention to display its power to foreign countries. It is interesting to know that the word “kanko,” or tourism, which is now associated more with peace time, was used for a battleship, something with the totally opposite association.

The global history of travel dates back to the ancient Greek and Roman period. People traveled for religious purposes such as visiting temples to worship gods, took trips to watch competitions like the Olympia Festival, and enjoyed recreation on the islands of Delos and Mykonos in the Mediterranean. In Japan, as the “Kan no Wa no Na no Kokuo” Gold Seal presented by the emperor of the Later Han dynasty shows, people started traveling abroad for political purposes as early as in the Yayoi period and went on pilgrimages such as Shikoku out of strong religious faith. However, these travels were probably not undertaken in pursuit of pleasure and were limited only to a special strata of people, like certain nobles and politicians.
From travel to tourism, and from nobles to the wealthy and to the general public, travel became something undertaken for fun and has changed rapidly since around the 1860s, about 100 years after the Industrial Revolution. Travel has undergone a major transition about every 50 years and is currently in the fourth transition phase. This “big bang” transformation of travel is summarized in the table below. 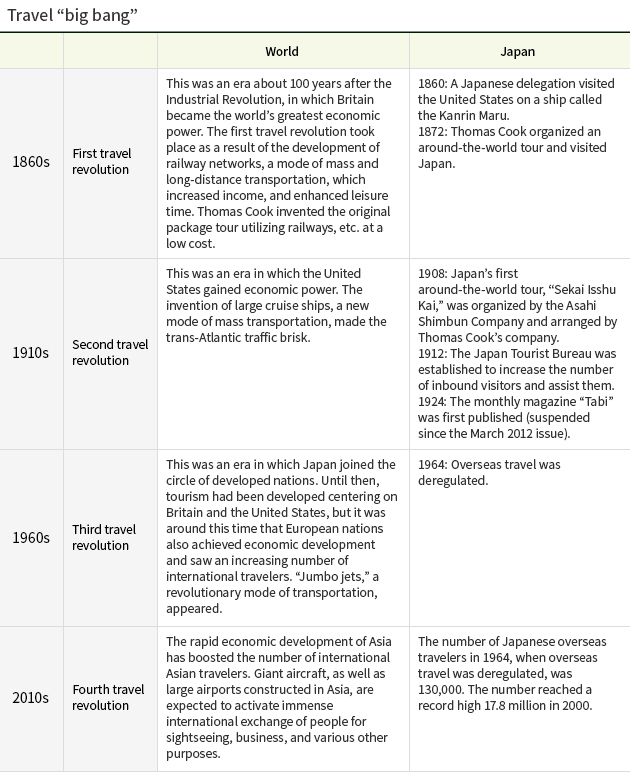 Thomas Cook, who appeared in the first travel revolution, played a huge role in the development of the tourism industry as a whole. He introduced various innovations to the industry, such as group discount tickets, planning visits to various attractions on the way to the destination, and creating travel flyers by leveraging his experience in the printing business. It can be said that he marked the starting point of the modern tourism industry and was the originator of our current package tours.
As an aside, Thomas Cook visited Japan in 1872 after the United States during his organized around-the-world tour departing from Britain. In his tour records, he describes the Seto Inland Sea as so beautiful that it is like a conglomeration of all the best things about all the lakes in Europe. He also liked beef in Japan. He also seems to have been impressed by jinrikishas, or rickshaws, human-powered vehicles that carry people. As a matter of fact, he loved them so much that he purchased one—even though they are quite large—as a souvenir before leaving Japan. Knowing that a famous figure like Thomas Cook was so deeply impressed by our country, we feel that we must put a greater effort into tourism so that today’s Japan can also impress many visitors.

Tourism Is a Form of Trade

Tourism of economically developed countries has historically always grown. When an economy is developed, people have more money to spend on, and tend to pay greater attention to, both domestic and overseas travel. While this is true, it should also be noted that tourism plays a role as a form of trade (see the table on the right). When Japanese go abroad and spend money, it is, in effect, economically the same as importing goods. Conversely, when foreign visitors spend money in Japan, it is, in effect, economically the same as exporting goods. The import of tourism, as seen in terms of the flow of money, is called outbound tourism, while the export of tourism is called inbound tourism.

In the 1980s, as the trade deficit with Japan accounted for a large percent of the United States’ total trade deficit, trade frictions between the two countries escalated. The federal trade deficit with Japan was about 2 billion dollars in the early 1970s but soon swelled to about 50 billion dollars in the mid-1980s. The United States—though acting unreasonably—demanded that Japan reduce its trade surplus, but it was difficult for Japan to slash its surplus rapidly. Amid this situation, Japan focused on the balance of services (non-trade balance in those days), which is an item of current account (see the graph below).

Japan’s balance of services had consistently been in deficit, with the size of outbound tourism being far greater than that of inbound tourism. So the Japanese government came up with the idea that if the balance of trade and the balance of services were combined, Japan’s surplus with the United States in the current account would look smaller. This idea led the government to adopt the Ten Million Plan in 1987 to double the number of Japanese travelers overseas to 10 million in five years, as an effort to solve the trade friction through boosting international tourism. Because of this plan, as well as the strong yen, as the graph on the right clearly shows, the number of Japanese travelers overseas increased more dramatically than ever. This globally unprecedented outbound tourism promotion policy achieved its target in four years, and thanks to the policy, along with other measures such as voluntary restriction of exports and the establishment of local subsidiaries to generate local employment, the trade frictions between the two countries gradually eased. The issue of current account ought to be studied more carefully and in greater detail, but from the above brief explanation, you have probably understood that tourism contributes greatly to the Japanese economy as a form of trade.

Aiming to Become a Tourism-oriented Country

As a country with scarce natural resources, Japan achieved rapid economic development through the manufacturing of various products after the war. Konosuke Matsushita, who in his lifetime built one of Japan’s most preeminent manufacturers, Matsushita Electric Industrial (currently Panasonic), made the remarks quoted below as early as in the 1950s and 1960s, a period when his company was vigorously engaging in manufacturing.

“Japan has been in pursuit of becoming an industrial and agricultural power, but I think Japan should be more fully tourism-oriented to establish itself as a tourist power.”
“Japan should basically be more fully tourism-oriented. I think the country needs something like a Minister of Tourism by establishing a Ministry of Tourism and should set aside an appropriate budget for the ministry and earn foreign currency.” (Konosuke Matsushita Hatsugen-shu I [Collection of Aphorisms of Konosuke Matsushita])

These “prophecies” of Mr. Matsushita were later fulfilled. The government established the Tourism-based Country Promotion Basic Act in 2006 based on the recognition of the extreme importance of making Japan a tourism-oriented country for the development of the nation’s economy and society. The government also inaugurated the Japan Tourism Agency in 2008 and began to steer active policies toward building Japan into a tourism power.
While the Japanese government focused on the outbound tourism promotion policy in the 1980s as a measure to alleviate the trade friction with the United States, as the table on the right shows, the government started beefing up the promotion of inbound tourism as well from the 1990s. The Koizumi administration (2001 to 2006) in particular laid the foundation for advancing tourism policies, and the Visit Japan Campaign, which was launched in this period, is still acting as a driving force to increase the number of foreign visitors in Japan. 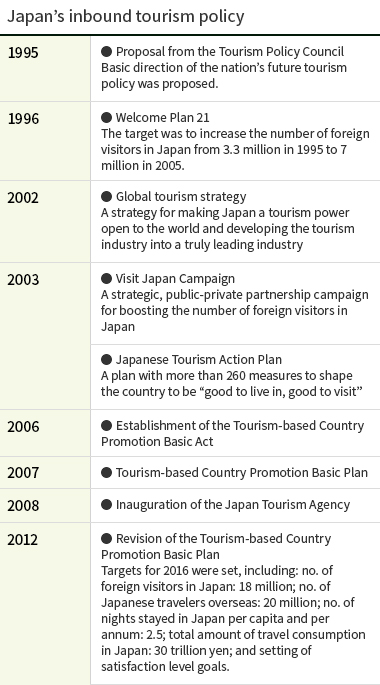 In addition to Japan’s traditional tourism resources that easily spring to mind, such as seasonal beauty, landscapes, and temples, new tourism resources like animation and games have also been added to Japan’s appeal and are attracting an increasing number of foreign visitors to Japan. However, as mentioned earlier, the amount of money that foreign visitors spend in Japan accounts for only about 5% of the total consumption. This is an area that we can expect to grow further.
Like regional cuisine that becomes popular through B-1 Grand Prix local food contests, there may be many untapped tourism resources in each region in Japan. It is, therefore, essential to explore what tourism resources are available in each region to attract visitors from within and outside of Japan, in order to drive the development of the Japanese economy and society. Money generated from tourism plays an important and powerful role in the economy. Its impact is as great as investment in public works, science and technology, and information systems. I hope that this column has helped you gain an interest in tourism, which is expected to inject power into the Japanese economy and society.