Which is happier, a group of two or three?

“Imagine you are taking a boat trip. One day, your boat is wrecked in a storm and you are thrown out into the ocean. The next morning, you find yourself being woken up by a person who had been on the same boat. You realize that you have been cast ashore on a desert island. The two of you start living on the island, waiting for rescue to arrive. Six months pass. One morning after another big storm, you find another person washed ashore. You shake the person awake. From now on, there will be three of you on the island. Will your life be happier?”

Think of each person here as just a “person,” without specifying their gender.

As human beings have strong sociality, they are designed to fear being alone. When there were only two people on the island, you instinctively valued the other one-and-only person in your life, even if you were displeased with him or her, out of a latent fear of losing that person’s company and then being alone. Being one of two people gives you a “near-death” feeling, making you respect and value your partner at all times.

When a third person appears in your life, however, the mutually dependent relationship loses its balance. In a relationship of three, even if you have a big fight with one of the other two people, or even if one of the two is gone, you will not be completely alone as long as you continue your relationship with the remaining person. This lack of “near-death” feeling causes endless political conflicts and bargaining, unexceptionally resulting in a friendly alliance between two people against a common enemy. To put it the other way around, a strong cooperative relationship can be sustained by having a shared enemy.

In mathematics, 1+1+1=3. This is a fact in algebra. In a social network, a relationship of three persons is called a triad. In human society, a triad always turns out to be “3=2+1.” In other words, in real social relationships, the formula is invariably “3=2+1” and never “1+1+1=3.” Thus, a relationship involving three is much more complex than that involving two. There exists a dynamism that cannot be explained by mathematics.

Therefore, the answer to the previous question would be, “When you have two other people in your life, you will be more unhappy than when you only have one other.”

A German sociologist named Georg Simmel, who laid the foundation of modern sociological theory, argued that a triad inevitably becomes a dyad, or a two-person group, plus the remaining other. In the early 20th century, when the concept of a network did not even exist, he recognized the significance of “all the forms of association by which a mere sum of separate individuals are made into a ‘society,’” based on which he explained what society was. He stated it meaningfully as follows: “society arises from the individual and the individual arises out of association.” 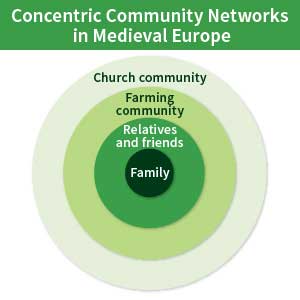 Human beings are inherently social creatures, unable to live their daily lives in complete isolation. When considering our relationships in life, whether or not we are aware of it, we can see that we are acting as a member of various networks of people.

The form of networks to which people belong changes with the times. In particular, as the modern era unfolded after the medieval period, drastic changes occurred. The structure of human relationships has basically remained the same ever since, even in this age of the Internet.

In medieval Europe, people’s lives were centered around their Christian churches. They had strong ties with their local communities and lived as members of a range of community networks including church communities, families and relatives, and farming communities. Such networks based on blood and community relations are formed in the shape of concentric circles, one within another, with overlapping memberships. 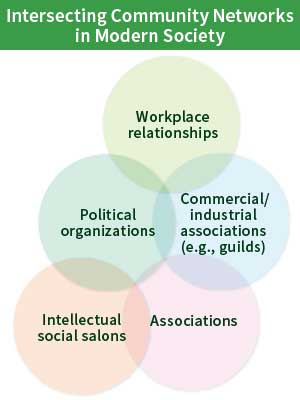 The industrial revolution prompted a large number of people to relocate to cities to work as city laborers. For the first time in human history, people left their close-knit blood relations and local communities and joined a number of new networks, each established for its respective rational purpose, including workplace relationships, political organizations, social clubs, and intellectual societies, to live as city residents. As these networks had different reasons for existing, they had few overlapping members, and were not concentric but intersecting communities. This was the greatest change in social structure in human history.

When focusing on social networks, we can see society in another light. Social network analysis is a method of gauging the relationships between individuals based on indices and visualizing the relationships. Specifically, correlation charts called social graphs (network graphs) are used, where individuals, namely actors, are represented by nodes, which are interconnected to one another to show how they are related. The technique has been studied academically as economic sociology to examine corporate management and strategies and organizational communications, among others, primarily in Europe and the U.S. Social network analysis is starting to gain acceptance in Japan too, amid heightened attention being focused on the prevalence of social media, social businesses, big data analysis, efforts to invigorate local communities, etc.

In Japan, the term “social network” is likely to be associated with social media, online communications, “kizuna” (meaning bonds, ties), a word that was widely used after the Great East Japan Earthquake, and community design in regional cities, among others. However, the concept originally developed primarily in Europe and the U.S. in areas of organizational theory, management strategy, and corporate management as a means of better understanding human relationships and communications within the organizations that make up corporations, and inter-corporate relationships such as alliances and keiretsu.

During the 1930s and 40s, for the first time in history, the famous Hawthorne experiments were conducted at Western Electric in Illinois in the U.S., clarifying the significance of social networks in connection with corporate management.

One of the experiments was to examine how illumination affected workers’ productivity by dimming the lights at the parts assembly site. Contrary to everyone’s presumption, productivity increased with lower illumination. Researchers participating in the experiments from Harvard University and MIT puzzled over this outcome. They ended the research, but a few years later conducted comprehensive interviews with the workers. It turned out that the workers had been making all-out efforts to maintain productivity even under the dimmed lights because they were excited about being the subjects of an experiment performed by prominent researchers, and did not want to let them down.

The bank wiring observation room experiment was another experiment performed. In this experiment, a group of 14 workers were observed to see how they engaged in the assembly and wiring of terminal banks. Each worker was assigned a role on an assembly line. The rule was that wages would be paid when the group as a whole achieved the target output. If output exceeded the target, the outcome would be regarded as a collective achievement of the entire group, with each individual receiving a bonus.

As the experiment was repeated, relationships unrelated to the formal division of roles were forged among the 14 workers. After analyzing seven kinds of networks within the group, including lunchtime poker friends, cooperative work relations, and co-workers who had a quarrel, two particularly tight-knit groups were identified. The figure on the right shows the network graphs depicting the different types of networks found among the 14 workers on the assembly line. The existence of a variety of ties is instantly evident.

Even more surprisingly, many kinds of “codes” were found to exist among the workers. One was the agreement not to work too hard because if they were too productive, their production output target would be raised, which would require them to work even harder. Conversely, if they were too lazy, they would not be able to earn money, so they came up with their own informal and undocumented rules to work at a moderate pace.

These experiments highlighted the fact that workers’ psychological status affects their motivation, which in turn impacts productivity, and that despite the existence of formal rules set by the organization, they make their own informal rules for their organization and groups and proceed with their work within the networks. These results indicated that human beings are largely affected by their inner motivation, and that even if each worker were, like a robot, assigned a scientifically subdivided role on an assembly line and received wages in a fair manner, the productivity of the workplace would be determined by the dynamics of social networks in the form of informal relationships. This should be understood when managing people.

Network-based thinking and putting it into strategic practice

From an economic sociology viewpoint, all kinds of relations between individuals as “nodes” constitute social networks, which generate all sorts of dynamics in relationships between nodes such as competition and cooperation. Social networks are sensitive at times, diverse, dynamically versatile, and important for individuals to understand in order to live as members of contemporary society.

Social network analysis in social science begins by examining a social phenomenon based on the relationship between a pair of nodes. When examining interpersonal relations within an organization, analyses of the relations between individuals are performed. When looking into teams within an organization, the interpersonal relations within each team and the relations between teams are analyzed. It is also possible to consider the relations between corporations and nations, in which case it becomes critical to consider what should be represented by each node for analysis. Deeming a pair of nodes as the basic unit, social network analysis is most characterized by its capacity to leap beyond the analytical boundaries of micro and macro analysis.

When a node engages in a social act and comes in contact with another node, a relationship is generated. The number of nodes within a network, relations between a pair of nodes and the complex structures of the entire network or part thereof, and how they are linked to one another can be visualized using vertexes and lines/edges/arcs in the form of a social graph or gauged for presentation.

In actual networks, when a sense of camaraderie is engendered through empathy, ties between people can trigger expansive innovation. Conversely, at times there is also a risk related to group dynamics, such as a case where a closed network gives rise to the concentration of power. By obtaining an in-depth understanding of the significance of social networks and applying the knowledge strategically, all kinds of innovations can be delivered to society. In contemporary society where informatization and the management of individuals are advancing, I hope to see social networks being widely applied as practical knowledge to achieve a democratic and free society.

Social networks are seemingly invisible social structures, but they are extremely important for individuals and organizations. As a field of study, research into social networks has a history of around a century and, since the 1980s, it has been applied to organizational research and corporate management, mostly in the field of American sociology. Unfortunately, however, the concept is yet to be widely accepted in Japan. To create a society where individuals can freely express their own intentions and to help you survive as a member of such a society, I would encourage you to get to know the capacity and profundity of social networks. I am convinced that understanding social networks will become increasingly important in comprehending the significance of a social system that protects diversity and free communication, including in connection to communication within organizations, management strategies, and wide-ranging innovations in society.