Japanese Movie Industry on the Way to Recovery

For many people, movies may be the handiest entertainment available. Movies give you time for a little recreation when you have no time or money for an outing and allow you to take a break from your daily life in that special space called the cinema, and to enjoy new sensations and excitement quickly within a short time span of around two hours. Movies are a handy way to refresh yourself spiritually.
Over a super long-term perspective it can be said that the Japanese movie industry has been gaining momentum for the past 10 years, with many new movies produced and released. The Japanese movie industry, which was in its prime in the 1950s, started to shrink in the 1960s with the rapid spread of TV sets, bringing about the shift in popular entertainment from cinema to television. The graph below shows screen and audience numbers over the past 50 years. From this graph we can see that the number of both screens and viewers decreased drastically, and the Japanese movie industry was at its nadir during the bubble economy in the 1990s. However, the number of both screens and audience members began to increase gradually from around 2000, which represented a positive sign for the industry. The recovery of the industry was due mainly to two factors. 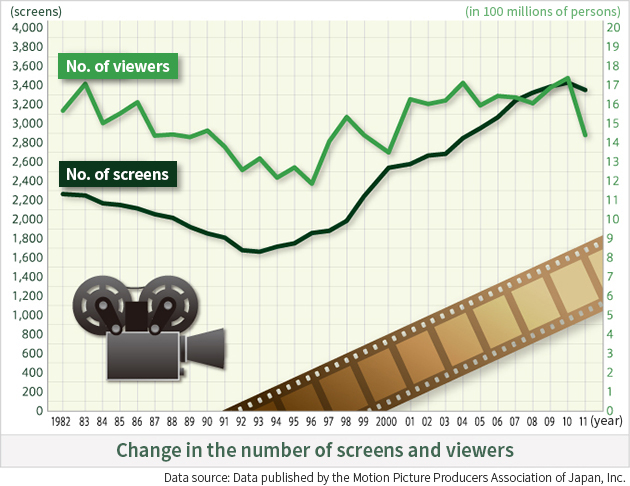 One factor was the emergence of cinema complexes with multiple screens. Cinema complexes, which have the advantage of being able to offer different movies to audiences, had already been popular in Western countries since the end of the 1970s. In Japan, Warner Mycal Cinemas opened Japan’s first full-scale cinema complex in 1993 to great success, and this ignited a surge in the number of cinema complexes nationwide, particularly in the 2000s. As of 2011, cinema complexes account for about 70% of the 3,339 screens extant in Japan. The spread of cinema complexes across Japan has provided an environment that allows people to readily go to a cinema whenever they want, and enjoy a movie in comfortable surroundings. 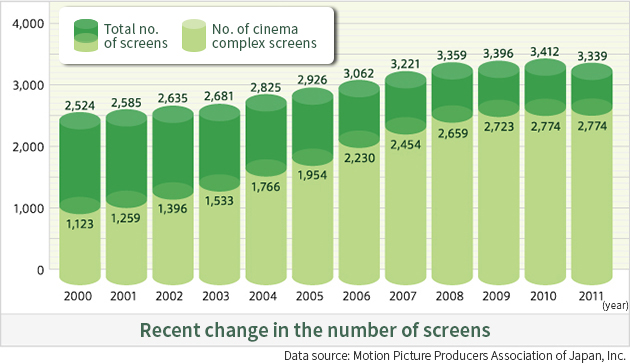 The most important player in the dissemination of the production committee method has been TV stations. TV stations used to pay large amounts of money to obtain TV broadcasting rights for movies, but then they decided to become involved in movie production from the start instead of paying that money. The first TV station to move into this business was Fuji Television Network. The movie was Nankyoku Monogarari (Antarctica) released in 1983, which became the then highest-grossing movie of all time in Japan, earning as much as 11 billion yen. Fuji Television Network then made a full-scale entry into the movie production business, and the movie Odoru Daisousasen The Movie 2: Rainbow Bridge wo Fusaseyo! (Bayside Shakedown 2), which was released in 2003 and is still fresh in our memories, set another record high for box office revenue, grossing 17.35 billion yen. As other TV stations also started working in the business seriously from the late 1990s, TV stations are now taking on some of the characteristics of movie production companies.
The greatest strength of TV stations is their advertising power. When people choose which movies to see from among the many choices available, many of them will select a movie that is advertised on TV. Advertisements in which the actors in the movie appear and promote the movie have a profound effect.
As another trend, many hit TV dramas have been turned into movies since around the middle of 2000. This has brought a significant change to the demographics of movie audiences. Most audiences before this were made up of children, who like animation movies, and their parents, as well as adults of around college student age and older, and the number of young people in between—i.e., junior and high school students—was relatively few. However, the movies adapted from TV dramas are attracting this age group to cinemas. Although their number is still few, this can be said to be a major step forward.

Since the movie industry is an attention-grabbing and conspicuous industry, it may look like a lucrative business. But in reality it is not. As a matter of fact, its share in the content business is the smallest, compared with other areas of the business, such as broadcasting, music, manga, animation, and games. The annual box office revenue (total sales of cinema tickets) is about 200 billion yen. This is said to be about the same as the annual sales of tofu (soybean curd). Even when combined with revenues from copyright on DVDs, TV broadcasting rights, licensed products, and others, the sales of the movie industry as a whole still fall short of 1 trillion yen. The sales of other media in the content business are 4 trillion yen for broadcasting, 1.6 trillion yen for music, and 5.5 trillion yen for publishing. Even when the sales of all media in the content business are put together, they are nowhere near those of a major company like Toyota or the NTT Group.
However, this also means that the content business has the potential for further growth. Now let us turn our eyes to the world and discuss what is needed to achieve that further growth.

In Europe, particularly in France, movies are called “the seventh art” and are commonly seen as an art form integrating all of the six other major art forms in existence since ancient Greek and Roman times. This is because every scene of a movie needs to incorporate the elements of all of the six other traditional art forms of painting, sculpture, architecture, music, dance, and poetry. This is well said, wouldn’t you agree?
The European movie industry, which had been growing as a new form of art since the end of the 19th century, was dealt a severe blow by World War I and World War II. For Europeans, who regarded movies as art unlike in the United States, where Hollywood movies were produced for mass entertainment and became popular as such, the reconstruction of cinema was an issue that had to be tackled nationally. This is why national support for movie production started in Europe. In France, in particular, the government sets aside a large budget (about 600 million euros [approx. 66 billion yen] in 2012) every year to fund movie production, support promising directors, and develop young artists, among other purposes. These and other nationwide efforts to support movies in Europe, which started in the turbulent period immediately after the war, including the launch of the Cannes International Film Festival in 1946, show that Europeans’ enthusiasm toward movies goes beyond what we would imagine.

Conversely, the Japanese government did not provide any particular support for the movie industry. Nevertheless, during the heady days of the bubble economy in the early 1990s, when the Japanese movie industry was at its lowest point, the government was probably aware, albeit dimly, of the risks facing the Japanese economy, which had been relying heavily on automotive, home appliance, and other manufacturing industries, as well as the need to find a new industry with strong growth potential. Amid this situation, in the late 1990s, Japanese animations and games were found to be very popular around the globe, and the government started to think that Japan should do something to take advantage of that popularity. The Koizumi administration embarked on a full-fledged policy to preserve and strengthen Japan’s intellectual property rights and declared an intention to make Japan an intellectual property-based nation. Various initiatives were then conducted under this policy, which led to the rapid expansion of content business in Japan.
As part of this trend, the Agency for Cultural Affairs began to make genuine efforts to support the movie industry by organizing the Japan Media Arts Festival to foster young artists and financially aid their activities as well as by co-funding the Tokyo International Film Festival together with the Ministry of Economy, Trade and Industry to back up the movie industry. Although the Agency for Cultural Affairs’ financial support for the movie industry is only a little less than 2 billion yen out of its total budget of about 100 billion yen, which is far less than other countries, it is significant that the support is allocated from the limited budget every year and is maintained without being cut.

To promote Japanese movies in overseas markets as a business, the Japanese movie industry has to overcome a huge barrier: Japanese culture. Japan created its own culture by importing various cultures from its neighboring countries, China and Korea, and merging them with its indigenous culture. For about the past 100 years, Japan has also accepted Western culture in a profound way and has westernized while also remaining in the Eastern cultural sphere. In this way, Japan has been open to and skillfully integrating other cultures into its own. But the question is, when, conversely, Japan disseminates its culture, how many countries are willing to share it? Japan needs to disseminate its culture in a continuous manner, because otherwise it is no exaggeration to say that Japan may become culturally isolated in the international community.
However, a phenomenon is actually appearing that shows that some Japanese culture is beginning to make inroads overseas. In the 1980s and 1990s, Japan exported a large number of animations to Western countries. Because these animations are said to have been sold at low prices without much consideration for copyrights, the business in those days was problematic, and there are pros and cons with regard to it. But the children who watched Japanese animations are now all grown up and have begun to organize Japanese pop culture events in Paris, London, Madrid, and other locations in Europe and the United States. This phenomenon demonstrates that Japanese culture disseminated to the world is beginning to be accepted. The Japanese movie industry needs to base its efforts to advance globally in those cities overseas that have started to act as centers for communicating Japanese culture.
Another proof of Japanese culture beginning to be accepted overseas is the fact that Japanese movies and actors are receiving prizes in international film festivals. Acknowledging that, although the level of Japanese culture is praised highly around the world, it is still immature as an industry, the Japanese government has also started putting muscle into expanding Japan’s cultural influence globally under the “Cool Japan” campaign to drive the growth of the industry.
Movies are a form of culture, art, and entertainment, but when they are to be promoted as an industry, it will inevitably create for Japan a difficult problem of how to overcome the cultural issue and politically drive the industry forward. The Japanese movie industry potentially matches up to the global standard, so what the industry needs now to achieve further growth is the world’s recognition. It is also desirable that Japanese broadcast programs—which have been the main form of modern media since the late 20th century, including such genres as drama, animation, and documentary—should also be promoted to make advances into overseas markets. 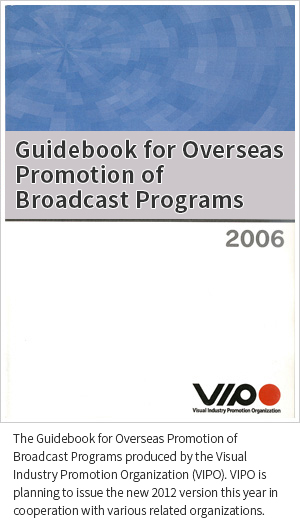 Movies, born in the 19th century and developed to a remarkable degree in the 20th century, will continue to thrive in the distant future as a medium that is the most borderless compared with various other media and as a tool that facilitates the understanding of other cultures. Movies will continue to contribute to the world in diverse ways regardless of the times. I hope that this column has encouraged you to want to know more about movies.

School of Cultural and Creative StudiesSchool of Business