Did you know that taxes for health promotion are causing a buzz internationally?
Hungary imposed a tax usually referred to as the “chips tax” on food products with high salt and sugar content in September 2011. Denmark introduced a “fat tax” on foods with a saturated fatty acid content exceeding 2.3%, such as butter, cheese, milk, and other dairy products, meat, edible oil, and processed products, in October 2011. In the United States, a tax on sugary drinks has been introduced in some states, arousing controversy.
These taxes on chips, fat, and sugary drinks are levied for the purpose of promoting public health and curbing medical expenditure for diseases caused by obesity.

Although it is unlikely that Japan, a country with long life spans and a low obesity rate, will introduce a similar tax soon, it could happen in Japan as well in the future, as metabolic syndrome checkups have started being provided and public concern about health issues is rising. Such taxes would also be likely to attract the government’s attention as a new source of revenue.
Another tax that is considered as similarly effective for promoting public health and curbing medical expenditure is a tobacco tax. Tobacco prices in Japan are far cheaper than those in Western nations, but because of a continuous increase in the tax rate for about the past dozen years, they have doubled compared to 20 years ago.

Some people may argue that smokers take responsibility for their own health and that such a tax is just misplaced kindness. However, the tobacco tax has an aspect that cannot be shrugged off simply as “misplaced kindness.” Smoking has what economists call “externality” effects—smoking affects people around smokers (passive smoking), while because smoking increases the probability of disease and hence leads to increased medical spending, it also poses a problem that concerns the entire nation. There would be no problem if smoking were an individual health issue that only affected smokers, causing them to pay higher medical expenses and die earlier. But this is not the case.

Let us then examine, from an economist’s point of view, whether the increase in the tobacco tax rate is really effective for promoting public health and curbing medical expenditure.

Benefits and Costs of Smoking

What are the benefits and costs of smoking? One benefit is the good feeling associated with smoking. Costs are good health, which smokers must give up by smoking, and money to buy tobacco. Opting to smoke means that the net benefits must be greater than the costs for the smoker. An increase in the tobacco tax results in a rise in costs, which works as an incentive for people to not smoke. 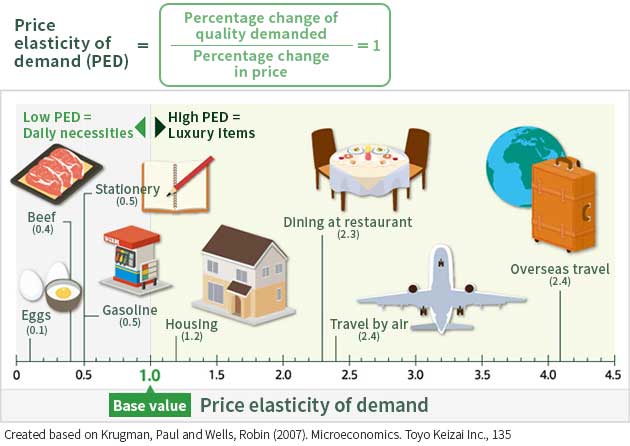 The Effect of Tax on Health Promotion

Let us examine the PED of tobacco. Tobacco is addictive, so for smokers, it is a daily necessity. They tend to buy tobacco even when the price goes up somewhat. As a matter of fact, the PED of tobacco is estimated to be about 0.4 to 0.7, which means that tobacco is a type of product for which demand is not responsive to a modest increase in its price. Therefore, when the purpose of increasing the price is to promote public health and curb medical expenditure, the price hike has almost no impact on tobacco consumption and is not effective for achieving the purpose unless the price is pushed up significantly.

Tobacco is thus generally said to be a product with low PED. However, there is one thing that tends to be overlooked: while some smokers are not affected by a price increase, some are affected by a price increase. There are both male and female smokers, and their age range covers a wide span from those in their 20s to the elderly.
Mature or older high-income people who have smoked for many years may not be bothered so much by an increase in tobacco prices. On the other hand, price hikes exert a larger impact on low-income young people in their 20s and 30s. According to a survey conducted in the United States, the PED of tobacco is 1.4 among college students. For young people, even the slightest increase in prices hits them directly. So such people may consider stopping smoking in the face of price increase to maintain their lifestyles. They are also more likely to be able to stop smoking than older people because they are less addicted to smoking.
If young people, who are more subject to the impact of price increases, decide to stop smoking, this will have a sufficient effect on promoting their health and curbing medical expenditure around the time when they become mature or older. In other words, the price increase is expected to help nip the smoking habit in the bud. Although the percentage of female smokers has been on the rise recently, the price increase is also expected to have a favorable effect on women’s future pregnancies and deliveries as well as for the health of their babies.

Look Holistically Rather Than Focusing on One Thing

When the price of tobacco is increased, however, one problem may emerge: smokers may start looking for a substitute for tobacco. Economists call this a “substitute good.”
Tobacco is legal but it is still a type of drug. If its price is increased drastically to reduce its consumption, many people may choose to use marijuana or other illegal drugs as substitute goods. If this happens, the tax raised for the purpose of promoting public health will result in causing damage to health through the use of a different drug. Furthermore, because these kinds of illegal drugs are a source of funding for criminal organizations, the increase in the price of tobacco may unintentionally end up assisting such organizations financially.
I, however, do not mean here to oppose raising the tobacco tax rate, but what I am trying to say is that we should give holistic consideration to an overall drug policy when increasing the tax. There is a need to, for instance, study the difference between marijuana and tobacco and develop a scientifically grounded policy. Without this holistic stance, the ultimate purpose of promoting public health and curbing medical expenditure cannot be achieved.

The same thing can be said of the earlier-mentioned tax on sugary drinks. The tax is not effective for promoting public health and curbing medical expenditure if consumers start consuming other foods and drinks with high sugar content instead of the sugary drinks subject to the tax.
On the other hand, the fat tax is said to be innovative because it is levied on all foods containing saturated fatty acids, with no substitute goods available for consumers who are looking for a non-taxed substitute. However, the fat tax still has a problem. Getting an adequate amount of fat in the diet is essential for good health. Only people who consume and accumulate fat excessively tend to succumb to disease. In other words, the tax is totally meaningless for people who maintain good health by consuming an adequate amount of fat and doing moderate exercise.

You probably understand by now that there are various problems associated with taxes introduced for the purpose of promoting public health and curbing medical expenditure. When a tax on certain goods is introduced, it is essential to look holistically at everything that may be affected, rather than focusing on the goods subject to the tax. Economics is a discipline that helps us develop the ability to look at things holistically.

You Can Find Economics Everywhere

Economics is based on the assumption that people make decisions by comparing the benefits and costs of every option at all times in their lives. This does not mean that people are always consciously making calculations. What is more important is unconscious decision-making, and economists study how people make decisions unconsciously based on benefits and costs. When shopping, no one calculates the impact of each food on their health precisely and analyzes the benefits and costs before deciding what to buy. However, when a price rises for a certain product, people naturally stop buying it and start looking for a substitute. By studying what incentives people respond to when taking action, we can analyze and predict how goods will move and how society will change. I have focused on health and taxation in this column, but as a matter of fact, everything around us is linked to economics.

School of International Politics, Economics and CommunicationCollege of Economics