Why do we need to learn history?

I teach Classical Antiquity, that is, the history of society that gave birth to the Greek and Latin classics, which can be said to be the basis of Western civilization.

Many readers might have asked themselves the question why you need to study history, while studying history in junior and senior high school.

As the saying goes, “A wise man learns from history.” People who don’t correctly understand past events easily lose sight of present events. For example, in order to know why Jews and Muslims are fiercely opposed over Palestine today, you must correctly understand the background of hostility—the history of Israel since ancient times.

Some people have a subjectively based, biased view of history, arguing, “We should do this” in their forecast based on their own interpretation of past events. It may also be important that we are able to point out the false grounds of an argument in light of objective facts.

On top of this, I believe that understanding that “history is multifaceted and multilateral in nature” is the most important objective of history study. I would like readers to be aware that there are always different perspectives, rather than to accept the version of history exactly as you learned it without questioning.

In this column, using the example of Cleopatra, who all of the readers are familiar with, the multifaceted nature of history is considered.

Image of Cleopatra and the Battle of Actium

What images do you associate with Cleopatra?

As you know, Cleopatra was the last queen of ancient Egypt. She is known as a voluptuous villainess who captivated two Roman heroes, Julius Caesar and Mark Antony, in an effort to conquer Rome, and as a tragic heroine who committed suicide by being bitten by venomous snakes.

An event considered essential in examining the image of Cleopatra is the Battle of Actium. According to world history textbooks, the Battle of Actium is described as a naval battle in 31 BC, in which Octavian defeated the allied forces of Antony and Cleopatra and attained supremacy in the Roman world.

Cleopatra is also described as below in the Odes(1.37) of Horace, a poet of the same period.

These descriptions by Virgil and Horace provided Shakespeare inspiration for his plays and influenced movies of later days, which have been the model of the imagery of Cleopatra that people have known to date.

In contrast, Annals, written by Tacitus about 100 years after the Battle of Actium, portrays the totally different history. Considered to be one of the greatest historians of ancient Rome, Tacitus is known for surprisingly accurate and fair descriptions. He briefly depicted the Battle of Actium: Augustus triumphed in the fractional fighting in the end and monopolized power. His relatives and faithful subordinates assumed central positions in the government. This is the essence of Principate. According to Tacitus, the Battle of Actium was nothing more than one of the civil wars of factional rivalry, which repeatedly occurred in the empire (Annales 1.1: et Pompei Crassique potentia cito in Caesarem, Lepidi atque Antonii arma in Augustum cessere, qui cuncta discordiis civilibus fessa nomine principis sub imperium accepit.; Historiae 1.1: postquam bellatum apud Actium atque omnem potentiam ad unum conferri pacis interfuit…). There is no description of Cleopatra.

Why were such different histories written? To unlock this mystery, the background of the Battle of Actium is explained below. 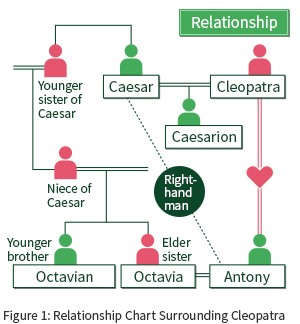 History is written by the victors

After the hero Caesar was assassinated, Octavian, who was adopted and succeeded the name of Caesar according to the will, became the ruler of the western empire, while Antony, who was Caesar’s aide, commanded the east.

Although Antony got married for political reasons to Octavia, an elder sister of Octavian, he later strengthened the alliance with Queen Cleopatra of Egypt. At the triumph celebrating the victory of the attack on the Armenian Empire, he bestowed on Cleopatra Cyprus, Cyrene and Syria. Surprisingly, he gave provinces of the Roman Empire to the queen of Egypt. Moreover, he got formally divorced from Octavia. With his sister being embarrassed, Octavian was furious with rage, and the confrontation between Antony and Octavian became decisive.

Octavian trumpeted, “Antony is a traitor to our empire and has descended into a captain of mercenaries, who serves a foreign woman” and garnered loyalty across Italy. He declared war not against Antony but against Queen Cleopatra of Egypt. He tried to convey the message, “This is not a power struggle (internal fighting) against Antony. It is a holy battle to protect Italy from the combined forces of the East led by Egypt.” The historically renowned Battle of Actium broke out in this way.

However, the fleet of Cleopatra left the front line shortly after the outbreak of the battle and Antony followed her. The battle was ended in the resounding victory of Octavian. Antony and Cleopatra fled to Alexandria hoping to stage a comeback. Their wish could not be fulfilled and they are believed to have committed suicide.

We associate the Battle of Actium with a major collision between the eastern navy of 500 ships and the western navy of 600 ships. Yet, what actually happened was a battle in which a part of the fleet of Antony and Cleopatra broke out at the center of the encirclement to flee to Egypt. Why did this end up the major sea battle as depicted in the Aeneid and the Odes? Behind this, there was Octavian’s intention as the victor.

For Octavian who won internal conflicts and acquired the title of Augustus (man of dignity or authority), the next challenge was to legitimize the position and establish a solid government. To this end, he needed a beautiful, magnificent story of the victory of Rome over the East and of the world peace realized by Augustus.

Maecenas, an aide of cultural affairs to Emperor Augustus, generously patronized poets and artists of the new age. Under the support of Maecenas, Virgil and Horace eloquently poeticized the birth-myth of the empire, while the historian Livius wrote Roman history since its foundation as a patriotic, educational and national history. Incidentally, the French word mécénat, which means “supporting art and culture,” is derived from the name of Maecenas. 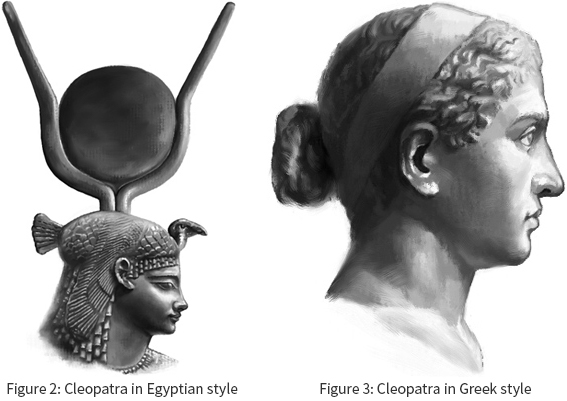 As the expression “the winners write the history” shows, it would not be an overstatement that the image of Cleopatra well known today is the image created by Octavian who wished to solidify his control over the empire. A “strong, beautiful, foreign woman” was a perfect image of the enemy. Seen in this light, our current society may be written in history by someone in the future according to their scenarios. 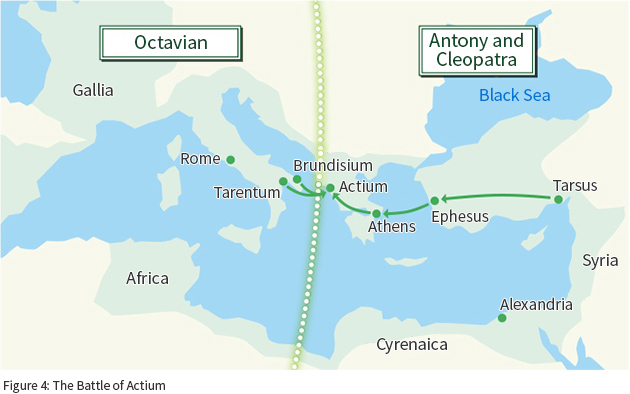 Developing “my” perspective of history through history study

Learning history is not equal to merely memorizing past events. Learning history provides food for thought to consider today’s world and what you are today through examining the lives of people in each period. I believe that the study of history is to reconfigure “my” own perspective of history by rereading past events in an effort to independently find out the way I intend to live my life today, or a kind of society I want to achieve.

I do encourage the readers to develop an eye to suspect “history” by learning history.